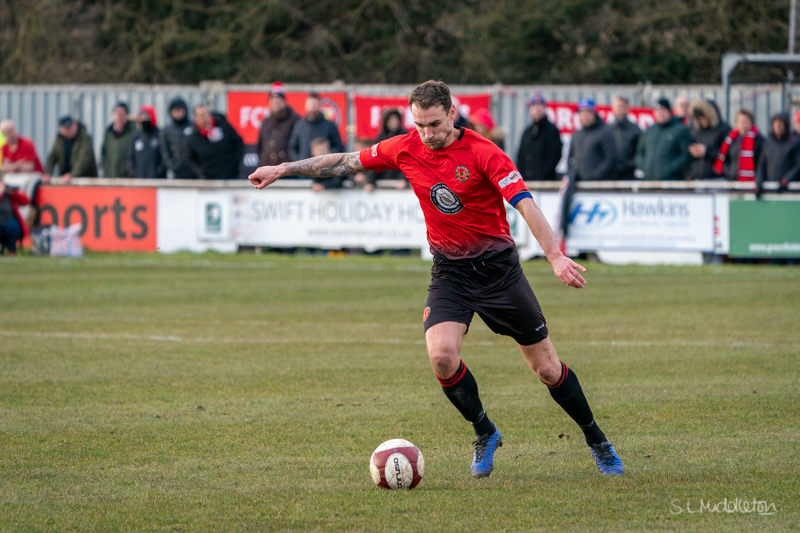 It may be cliché but Mickleover Sports Northern Premier League visit to Ashton United was certainly a game of two halfs.

Ashton had their early chances too, with a free kick sent high over the bar after four minutes, followed by shot’s from Sheridan and Brewster both blocked by the Sports defence.

Stuart Beavon then made a break but lacked support, before Hardcastle came back for Ashton, sending his shot well wide.

The partnership between Beavon and Webb continued to cause problems for the Ashton defence, but a through ball although splitting the defence, was just out of Webb’s reach.

Ashton’s Ludofu was first in the book, but Hardcastle followed up with a couple of random shot off target.

But Sports began to take control of midfield, with Beavon going close after a corner. Karel Tvaroh was then sent on a telling run by Mason Warren, Webb collected the ball but a shout of handball as the defender challenge went unrewarded.

A minute later Kemy Agustien was brought down, before a Webb managed to chip Ashton’s keeper Hartley, only for Sass-Davies to clear his effort off the line.

But after 21 minutes Sports pressure finally paid off, as Beavon and Young moved the play forward, Webb chested it down, turned and volleyed into the bottom left hand corner of the net.

Webb was continuously causing problems for Ashton, with long balls providing excellent service. Scott was the first Sports player in the book, but on the half hour Ashton seemed to rediscover their attack.

Hardcastle, Wilson and Rowney all went close for the home side, before Webb went just wide from a Scott cross for Sports.

Turner and Freeman combined well to keep the Ashton strikers out, and after 36 minutes Webb was just short of collecting a rebound from a Beavon shot, beaten away by Hartley.

The momentum was back in Sports favour as the half time whistle approached, with Webb’s shot onto the roof of the net from another Beavon cross, but a couple of breaks saw Hardcastle hit the Sports post, before play was held up with the referee requiring treatment.

The referee was replaced by one of his assistants, while one of Ashton’s media men ran the line. But little would anyone have realised how the game was to take a sour turn.

Sports had a dangerous free kick in the early minutes of the second half after Webb was fouled. The kick was put out for a corner, which Scott took and put back into the box before his shot was saved by Hartley.

Freeman was the first booking for the stand in referee, but after Webb a shot straight at the Ashton keeper, Scott put the ball across the face of the goal and Thomsett then went close for Ashton.

But on 63 minutes a Rowney cross seemed to confuse the defence and found its way passed debutant keeper Harrison Davison-Hale into the back of the net.

Ashton’s McHale tried a spectacular bicycle kick which went just wide of the post and Freeman won the ball from a Warren corner, but his effort easily collected by Hartley.

Hardcastle was then on the attack again and had touch with Freeman, which the referee decided was a penalty. Agustien led the barrage of Sports players disputing the decision and received a double yellow card, before Wilson put the penalty away to give Ashton the lead.

With Marcus Calderone on for Freeman and Andy Wright on for Scott, there was another penalty appeal from Ashton. Turner was then pushed in the Ashton penalty area and despite appeals they were turned away and Turner joined the yellow cards a few minutes later.

It wasn’t long before the referee did award another penalty, but for Ashton again, after McHale went down easily from a Calderone challenge. Wilson scored again and despite a desperate effort from the 10 men of Sports, it remained 1-3.