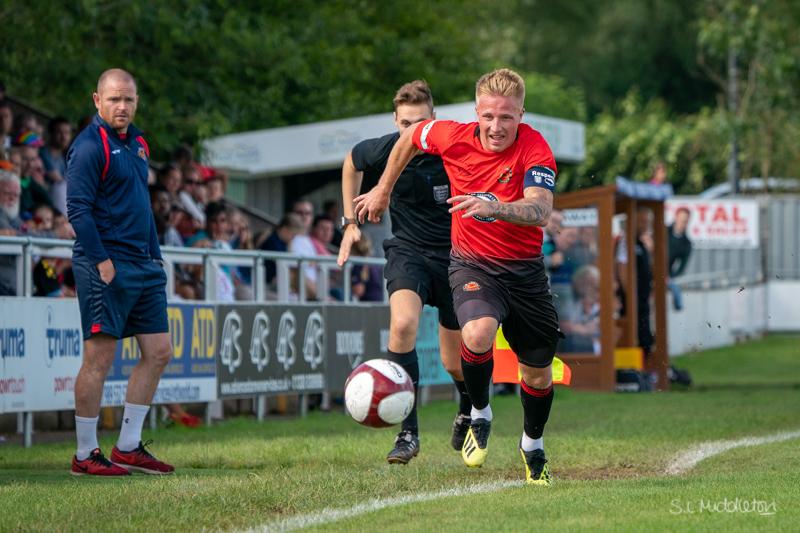 Lee Hughes’s delicate lob proved to be the highlight in a hard-fought game which saw Mickleover win 1-0 over Scarborough Athletic.

Hughes’ fourth goal of the season saw Mickleover continue their great form which has seen Sports now unbeaten in four games which leaves Scarborough are now winless in their last six.

The first half saw the game struggled to get going with both teams having possession but not being able to create chances. This included a Pablo Mills’ header cleared off the line from Mason Warren’s corner and Jake Scott heading over from close range.

The next minute saw Jiri Boula winning the header leading to a perfectly lofted ball by Warren which found Hughes who beautifully lobbed it over goalkeeper Thomas Taylor to give Sports the lead.

Hughes could have gotten his and the team’s second when he found himself on goal, but Taylor saved his shot from a tight angle. This was the start of a Mickleover onslaught, which saw Max Watters beat multiple defenders and had his effort saved and an effort saved brilliantly by Taylor once again.

The second half saw the visitors have a host of chances. James Walshaw had his shot saved by keeper Nathan Broome and Paul Walker’s volley just metres away. As we approached the hour mark, Mickleover needed a second goal to calm nerves down.

That could have happened in the 69th minute when Max Watters found himself through, but, fired it wide off the far post. Hughes again could have gotten his second goal of the game, dribbling past one defender saw his shot again saved by Taylor.

Nathan Modest played a one-two with Stuart Beavon which saw Modest’s effort saved before Scarborough Athletic had a late chance to rescue a point for the visitors, but Broome made a superb save from Paul Walker’s free kick.

Mickleover will believe that they deserved the win in a very physical game where they could have scored two or three.

Mickleover Sports will want to stretch their unbeaten run to five games when they face Morpeth Town at the Dan Amott Arena on October 8th.