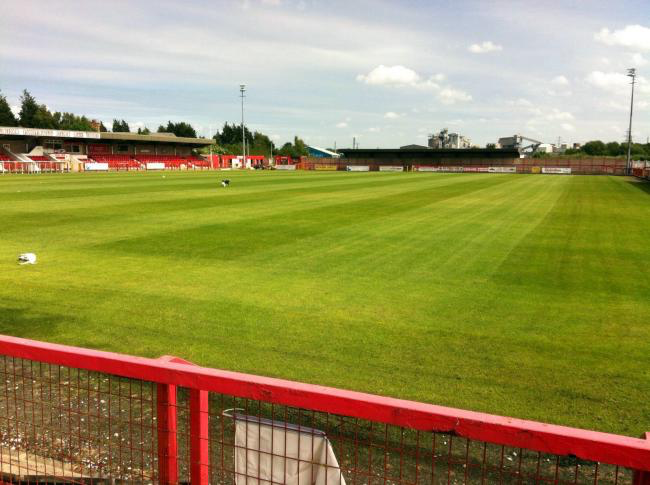 Mickleover sports were defeated by Witton Albion at Wincham Park due to a 70th minute goal by Danny McKenna.

Although the first half was an even contest, the second was a struggle for Sports who were unable to match Albion’s physicality and movement off the ball.

Sports, came into this game having beaten Stalybridge Celtic in their opening game whilst Witton Albion could only manage a draw away at Whitby Town.

Sports who had won their previous game looked the better team in the opening few minutes with Jack Storer eager to get forward and make something happen.

McGrath’s men didn’t have to wait long before their first chance came. Ben Turner whipped in a cross to the far post, which found its way to Richard Batchelor. Fortunately for Witton, Batchelor’s header went wide of the post, leaving the score line level.

For the next few minutes the game started to even out, with Witton gaining more possession of the ball. Their confidence started to grow and at around the 15 minute mark they had a great opportunity to take the lead.

Witton’s Will Jones was so close breaking the dead lock but he couldn’t make contact with the ball after it was fizzed across and behind Mickleover’s back line, leaving practically an empty net to direct the ball into.

Throughout the first half there were no clear cut chances for either team which meant that players from both teams were resorting to long distance strikes in a bid to open the scoring.

Mason Warren came close after his low firing shot skimmed across the wet surface and just past the post. Witton replied with an attempt of their own which left everyone in the stadium gasping for air.

The first half ended goalless, and with neither team really posing a threat to the other.

Within a few minutes of the opening of the second half, Sports’ Batchelor found himself on the end of a nasty collision which left him on the ground for a few minutes.

Despite his best efforts to carry on he was replaced a few minutes later by Ricky Ravenhill.

There were no real chances for either team and the game remained a stale affair, but that all changed when Chib Chilaka was brought off with 25 minutes to go. Without him and Batchelor, Sports lacked any real physicality up top and Witton began to dominate the possession.

Witton who sensed Sports’ vulnerability took the lead within five minutes of Chilaka leaving the field. Witton had piled bodies into the box and a low cross/pass that was left for too long was eventually pounced upon by Danny McKenna who then fired the ball into the roof of the net.

Throughout the remainder of the game Sports tried to ride the storm and find a way back into the game. Although it was difficult, they managed to pin Witton back into their own half for the last 15 minutes.

Time after Time Sports’ efforts were repelled, and in the dying minutes Nathan Modest was blatantly pushed in the penalty box whilst jumping for a header. Amazingly the referee did not award a penalty and by now it seemed as if it was all over and within a minute it was.

Although Sports fought back towards the end of the second half, Danny McKenna’s strike was enough to secure all three points for the home side who now sit above Sports in the table.

This Friday’s FA Cup game is a chance though to regroup and regain confidence before playing Stafford Rangers on Monday.